The Nuns of Sant'Ambrogio: The True Story of a Convent in Scandal 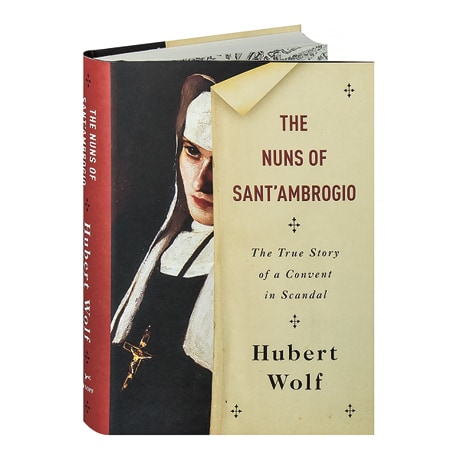 The Nuns of Sant'Ambrogio: The True Story of a Convent in Scandal

In 1858, a German princess recently inducted into the convent of Sant'Ambrogio in Rome, wrote a frantic letter to her cousin, a confidant of the Pope, claiming that she feared for her life. A subsequent investigation uncovered the shocking secrets of a convent whose mistress coerced her novices into lesbian initiation rites and heresies, and herself entered into an illicit relationship with a young theologian. Leibniz and Gutenberg Prize winner Hubert Wolf, a professor of medieval and modern Church history in Muenster, plumbed recently released Church documents to tell how one woman was able to practice deception, seduction, and murder in the shadow of the Vatican itself.

"Astonishing ... [and] much more than a true-crime thriller about murderous lesbian nuns. It's also a very serious study of how the church deals with scandal."—Washington Post

"The scandal that Wolf discovered in a secret Vatican archive, in 1999, would have left a true-crime writer salivating.... [He] reconstructs what went on inside the convent based on transcripts from the trial and intercepted letters.... [There is] something remarkable about a poor, uneducated nun who brings the Jesuits to their knees while remaking herself as a goddess."—NYTBR