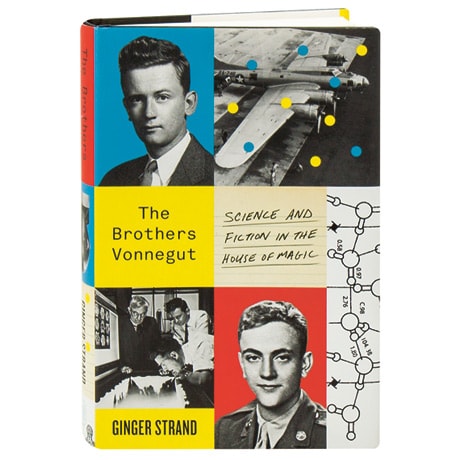 In the mid-1950s, Kurt Vonnegut took a job writing press releases for General Electric, where his older brother Bernard was already a leading scientist in GE's research lab, nicknamed the "House of Magic." While Kurt has ambitions to be a novelist, Bernard is working on cutting-edge weather-control experiments, hoping to make deserts bloom and farms flourish. But as Ginger Strand relates in this melding of biography and cultural history, Bernard has misgivings after the army takes charge of his work, while discovering that cloud-seeding is causing alarming changes in the atmosphere—and Kurt begins to write a new kind of fiction, depicting scientists grappling with moral questions and with fantastic inventions gone awry.

"A gem. Strand has unearthed a little-known, complex story about science and politics that touches on big questions about ethics and progress, and she delivers it with an infectious and unabashed exuberance. Her writing crackles on the page.... But what's most memorable about The Brothers Vonnegut is how strongly it articulates a message about the importance of making intentional decisions about the work each of us does and not blindly pursuing vocations out of convenience or for money, ego or fame."—SFChronicle

"The Brothers Vonnegut ... sings with [Kurt]'s gift for frank and snappy expression.... Strand knows how to mount a quote with just the right details."—Slate

"Though many readers will be familiar with the story of a science-damaged postwar American writer and his relation to the military-industrial complex, few will have known this fascinating story of the Brothers Vonnegut. And few works of nonfiction on literary writers are as clear-eyed about the material connections between science, fiction, and war."—Flavorwire