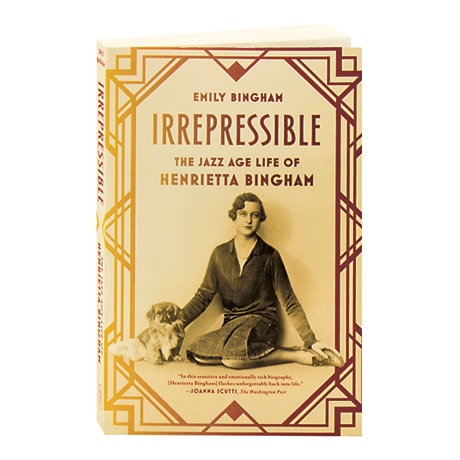 Raised like a princess in one of the most powerful families in the American South, Henrietta Bingham ripped through the Jazz Age like an F. Scott Fitzgerald character: intoxicating and intoxicated, seductive and shameless, selfish and often terribly troubled. In New York, Louisville, and London, she drove both men and women wild with desire; her love affairs with women made her the subject of derision, however, and caused one doctor to try and "cure" her. For biographer Emily Bingham, the secret of who her great-aunt was—and why her story was concealed for so long—led to this "painstaking reconstruction of Henrietta's story [that] shows that she was a pioneer of sorts" (Wall Street Journal).

"Henrietta Bingham's greatest achievement was making people fall in love with her. Thus she offers a delicious excuse to be back in a time and among a group in which love was celebrated with gratifying complexity and tenderness.... [Irrepressible's] literary value, though, is that of an attenuated tragedy, reminding us of our continuing failure to help people ... who can't quite survive life, even as they try valiantly to live it."—NYTBR