The Princess and the Pea 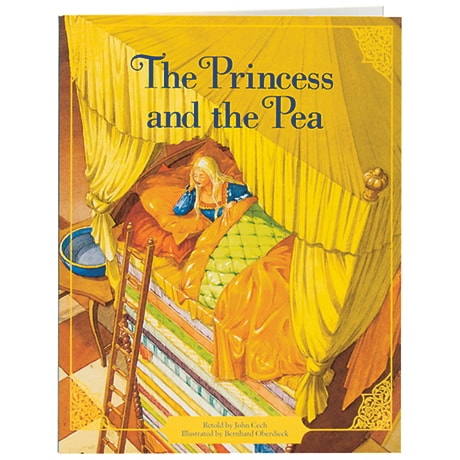 The Princess and the Pea

Having turned down ladies blessed with beauty, wealth, and intelligence—none of them were true princesses, after all—a young prince has exhausted himself looking for a bride. His mother wonders if he isn't being too picky, but then a bedraggled young lady arrives at the castle on a stormy night, claiming she is the daughter of a king. The hopeful queen arranges a test to prove it, and is delighted when the lady passes the test—though it seems that the prince has already decided she is the princess he seeks. A professor of English and children's literature, John Cech retells this classic tale made famous by Hans Christian Andersen, for readers and listeners up to 8. It is still set long ago and far away, of course, but Cech adds lighthearted humor and details of his own, as well as notes on the origin of the tale and the various versions told over the centuries.

"Cech's fluid text sparkles in this well-crafted retelling. He fleshes out the character of the prince with a refreshing addition in which the young man tells the Queen, 'I didn't need a pea to tell me she is a real princess. I could see it in the gentleness of her eyes, hear it in the softness of her voice, and feel it in the kindness of her heart.' The illustrations, created with colored pencils, pastels, and acrylics, glow with lustrous yellow-gold, blue, and green tones. The court clothing is portrayed in splendid detail, and bold foregrounds dominate the pictures. In one lovely spread, the prince, dressed in blue knee breeches and a doublet trimmed with green ribbon, is lying on a couch; the Queen, wearing a lace-decorated yellow gown, is gazing at him from the background; behind her are the muted figures of dancing couples. An interesting historical note informs readers that similar story elements have appeared in tales from Sweden, Italy, and Kashmir."—Booklist