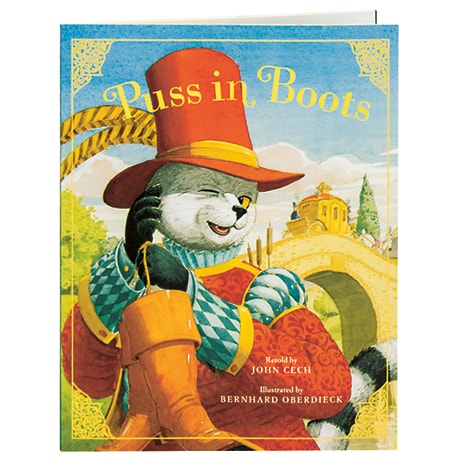 The tale of a talkative cat in a hat and boots who secures wealth, happiness, and job security for his poor master has been told for centuries, and in many different ways. In this retelling for readers and listeners up to 8, with Bernhard Oberdieck's finely detailed, beautifully costumed illustrations, Puss seems almost like a furry human once his boots are on. Nor is the landowning ogre as frightening as in other versions (even if he's still so bad-tempered that no one likes him), so perhaps it's fitting that he doesn't get eaten this time, but merely spends the rest of his days as a mouse in his own castle. A professor of English and children's literature, John Cech includes plenty of lighthearted humor, as well as notes on the origin of the tale and the various versions told over the centuries.

"An enjoyable retelling of the timeless story of the clever, talking cat who is determined to change his poor master's fortune. The narrative is descriptive, lively, and droll, and the colorful watercolor-and-ink illustrations, filled with period details, are intricately rendered in scenes that move from rural settings to lavish castles. Tale purists will note some subtle differences; for example, the ogre in this edition escapes death at the story's end. An accessible, entertaining version for younger readers and listeners."—Booklist