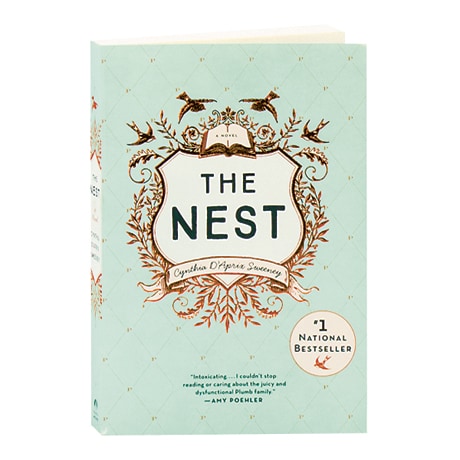 The Plumbs have been waiting. Ever since their father died prematurely, Melody, Beatrice, Jack, and Leo have watched the modest trust fund he left for them—"the nest"—grow exponentially in the booming stock market, knowing that when the youngest of them reaches 40, the windfall will bail them out of the big mistakes they've made in their lives. But after Leo, freshly released from rehab, crashes his car with a teenaged passenger aboard, the nest may no longer be there for them. In this hilarious, acutely perceptive debut novel, Cynthia D'Aprix Sweeney gives us four very flawed, very real siblings who must find the inner resources to save themselves.

"A masterfully constructed, darkly comic, and immensely captivating tale ... not only clever, but emotionally astute. Cynthia D'Aprix Sweeney is a real talent."—Elizabeth Gilbert

"A generous, absorbing novel.... Sweeney's endearing characters are quirky New Yorkers all.... A fetching debut from an author who knows her city, its people, and their heart.—Kirkus Reviews (starred review)

"Scenes both witty and tragic ... glow with the confidence of an experienced comic writer.... [The author] maintains a refreshing balance of tenderness. Rather than skewering the Plumbs to death, she pokes them, as though probing to find the humanity beneath their cynical crust."—Washington Post