The Tree in the Courtyard: Looking Through Anne Frank's Window 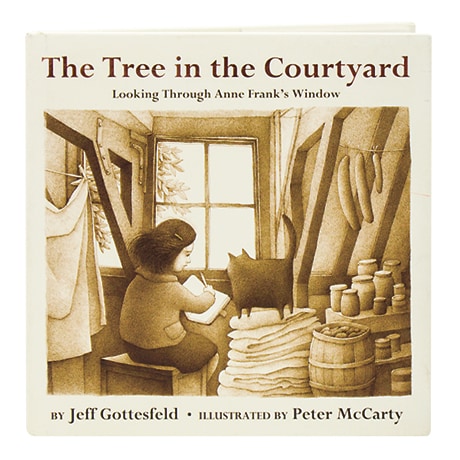 The Tree in the Courtyard: Looking Through Anne Frank's Window

(One of the New York Times Book Review's 10 Best Illustrated Children's Books of 2016) With gorgeously textured drawings in brown ink by Caldecott Honoree Peter McCarty, this book for readers 6 to' is a story told by a tree—the towering horse chestnut behind the factory annex in Amsterdam that Anne Frank mentions three times in her diaries. From Anne's first visits, before the family went in hiding, the tree watched the little girl play and laugh, and became fond of her. When strangers invaded the city and warplanes roared overhead, the tree watched the girl peek out of the curtained window of the annex, and noticed how the girl stared at her winter branches, "so moved and entranced that she couldn't speak." The tree watched as she and her family were taken away, and when her father returned after the war, alone. The tree died the summer Anne Frank would have turned 81, but its seeds and saplings have been planted around the world as a symbol of peace.

"A horse chestnut tree in the courtyard next to Anne Frank's secret annex serves as the focal point in this beautifully subtle picture book. Beginning with a quote from Anne's famous diary describing 'the bare chestnut tree glistening with dew,' the spare text and delicate illustrations create a moving and powerful ode to the tree that gave Anne comfort and hope during the years she and her family hid from the Nazis. Bearing witness to Anne's life in the annex, the tree serves as a fitting surrogate for readers, watching as Anne's story unfolds yet having no power to affect the outcome. Simple phrasing keeps the narrative poignant without becoming overly dramatic or sentimental. Mild anthropomorphizing gives the tree heart. Monochromatic illustrations rendered in brown ink are exquisitely detailed in fine lines and shading, conveying a solemn beauty befitting the book's subject. Additionally, the narrative choice to tell Anne's story through a series of moments deftly captures its pathos and importance, distinguishing this work from similar titles.... Details of Anne's arrest and death are presented in a brief yet thorough afterword, as is a list of the American locations where saplings from the chestnut tree have been planted in her honor. A noteworthy and highly recommended introduction to a difficult and significant topic."—School Library Journal (starred review)