Band of Giants: The Amateur Soldiers Who Won America's Independence 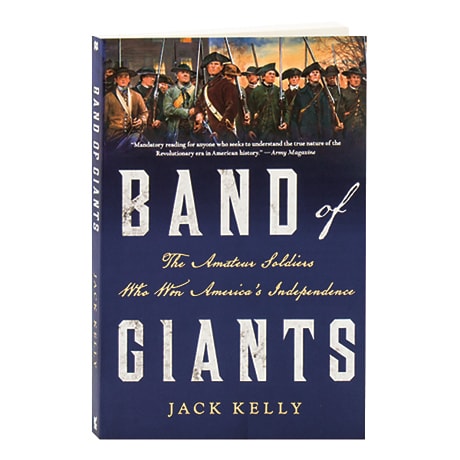 Band of Giants: The Amateur Soldiers Who Won America's Independence

The American Revolution is often viewed in terms of a bold political experiment conceived by the era's brightest minds; that experiment would never have played out, suggests historian Jack Kelly, without the substantial contributions of talented amateur soldiers under George Washington's command. Here we meet men like the namesake of Fort Knox, burly Boston bookseller Henry Knox, who took over artillery operations at the age of 25 despite having no military experience. Nathan Greene, a Quaker and a pacifist, became America's youngest general, while Richard Montgomery—commemorated by the naming of 18 U.S. counties—launched a full-scale invasion of Canada that failed, in the process becoming the revolution's foremost martyr. The soldiers of the revolution were a diverse lot of merchants and fishermen, mechanics and farmers; Washington himself consulted books on military tactics. Kelly vividly captures the fraught condition of the war—the bitterly divided populace, the lack of supplies, the setbacks on the battlefield, and the appalling physical hardships—while illuminating how these inexperienced warriors could take on and defeat the world's leading superpower.

"Armed with the latest research burnished by a bright, brisk writing style, Jack Kelly has done a masterful job of retelling the story of the Revolutionary War.... This book is highly recommended for anyone seeking to understand the birth of the United States."—Willard Sterne Randall