The Roman Guide to Slave Management: A Treatise by Nobleman Marcus Sidonius Falx 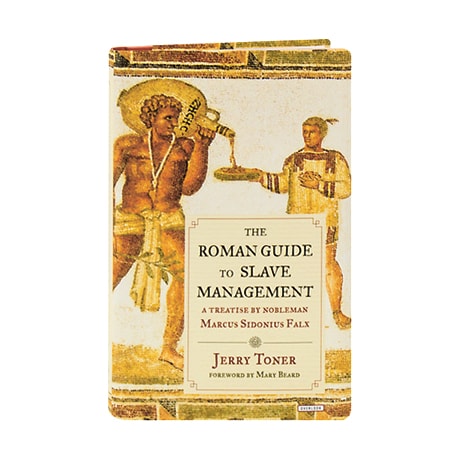 The Roman Guide to Slave Management: A Treatise by Nobleman Marcus Sidonius Falx

Marcus Sidonius Falx is a successful Roman citizen, born of a relatively well-off noble family. He lives on a palatial estate in Campania, dines with senators and generals, and, like all of his ancestors before him, owns countless slaves. Having spent most of his life managing his servants—many of them prisoners from Rome's military conquests—he decided to write a kind of slave owner's manual for the benefit of his less capable countrymen and also for the edification of his foreign guests unaccustomed to the institution. The result is a sly, subversive guide to the realities of servitude in ancient Rome. Classics scholar Jerry Toner uses Falx, his fictional but true-to-life creation, to describe where and how Romans bought slaves, how they could tell an obedient worker from a troublemaker, and even how the ruling class reacted to the inevitable slave revolts. Toner also adds commentary throughout, analyzing the callous words and casual brutality of Falx and his compatriots and putting it all in context for the modern reader.

"Thought-provoking ... written in a tone that feels both educated and archaically brutal.... [Toner's] history and commentary provides context for the dirty institution upon which modern civilization is built."—Publishers Weekly

"Captivating.... Toner draws on Seneca, Pliny the Younger and various Roman chroniclers to create in Falx a credible portrait of the affluent slaveholder—smug, smart, sardonic."—Bloomberg.com