The Demon's Brood: A History of the Plantagenet Dynasty 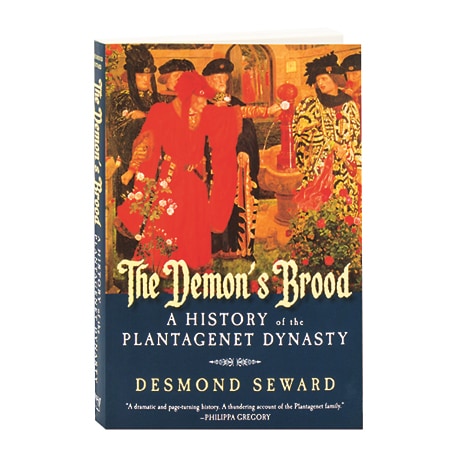 The Demon's Brood: A History of the Plantagenet Dynasty

The Plantagenets reigned over England from the mid-12th century to the late 15th, longer than any other family: four Plantagenet kings were murdered, two were nearly deposed, and the last (and most notorious), Richard III, was killed by rebels in battle; Shakespeare wrote plays about six of them, further entrenching them in the national myth. Here Desmond Seward takes us from Black Fulk, the Angevin count who supposedly wed a demon, through the Angevin kings, the main Plantagenet line, and the houses of Lancaster and York. Born in Paris and educated at Cambridge (the scion of a long line of Anglo-Irish wine merchants in Bordeaux), Seward has published more than two dozen books, including several gripping chronicles of the late medieval period in England and France. "This is a big ballsy history of the sort that is seldom written in these nuanced days and Seward reminds us of a style that has been all but lost in this thundering account of the Plantagenet family," assayed Philippa Gregory in London's Times. "The general reader will find this book invaluable for filling in gaps of knowledge and putting a vivid story to a previously unknown monarch.... This is not our world of science and skepticism; this is the medieval world—populated with heroes and seductresses, gods and murderers—and few know it better than Desmond Seward."

"Historian Seward again serves up a neat, clear view of an English dynasty—this time, the Plantagenets. The author deftly covers 300 years of English history and more than a dozen kings. Readers will delight in the efficient completeness of this narrative. Seward is a good author to turn to for ease in reading history; his writing style is quick, vibrant and delightfully pithy in its simplicity of phrase."—Kirkus Reviews