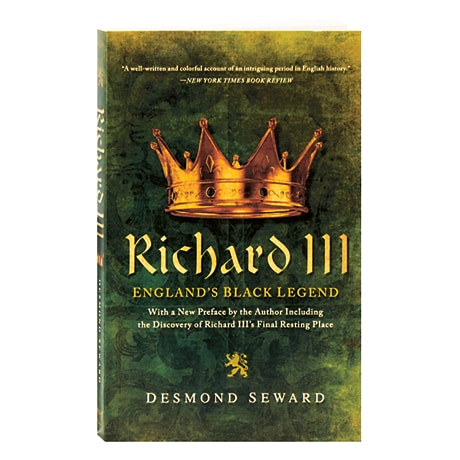 With the victory of Henry Tudor in 1485, the usurping dynasty made an effort to besmirch the last Plantagenet's reputation, and some historians hold that Richard III's "black legend" is nothing more than political propaganda. Yet such an interpretation, Desmond Seward argues here, suggests a refusal to face historical facts. Even in the king's lifetime there were rumors about his involvement in the murders of Henry VI and of his nephews, the "Princes in the Tower," while Richard's reign was considered by many to be a nightmare—not least for the king himself. Seward's 1983 history of "the Heathcliff of English Kings," as he deems him, is here revised to take into account the discovery of Richard III's remains in 2013. Born in Paris and educated at Cambridge (the scion of a long line of Anglo-Irish wine merchants in Bordeaux), Seward has published more than two dozen books, including several gripping chronicles of the late medieval period in England and France.

"Perhaps the best, and certainly the most readable, of recent biographies."—John Julius Norwich

"A valuable addition to the file, a biography of strong feeling and firmly held conviction arrived at after long thought. It is most readable."—Financial Times (London)