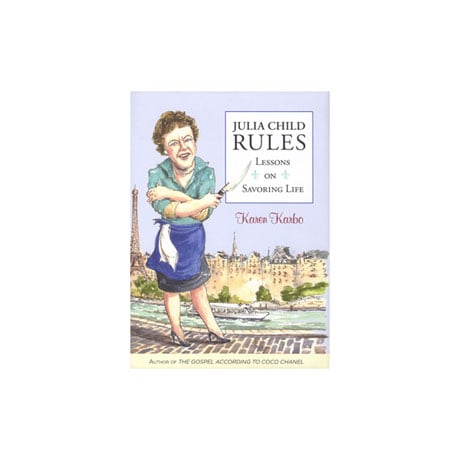 In her follow-up to The Gospel According to Coco Chanel and How Georgia Became O'Keeffe, Karen Karbo delves into the life of the unpretentious chef, author, cooking show star, and bon vivant Julia Child, with an eye towards learning how we too can savor life. In taking us from Julia's idyllic childhood in California to her confusing young adulthood in New York, her years working for the OSS in Sri Lanka, her love affairs with Paul Child and with Paris, and her decades as America's beloved French chef, Karbo stops for life lessons along the way, comparing her own experiences and illuminating how to live by your whims, make the world your oyster, make marriage happy, work hard, and immerse yourself in life.

"Karbo has written that rare bird of a book: one that manages on every page to be as enlightening as it is entertaining, as smart as it is funny. In prose as clean and sharp as your best kitchen knife, Karbo gives us a portrait of the incomparable Julia Child that's intimate, inspiring, and unlike anything I've ever read about Child before. I want to make wallpaper out of this original and beautiful book just so I can have Karbo's unparalleled wit and wisdom always on hand."—Cheryl Strayed

"The love affair with the iconic Julia Child continues in Karbo's guide to living with abandon, as Child always did, which gives a window into the legendary cook, author, and television host's fascinating backstory. One of the lessons Karbo draws from Child's life is that one must face adversity rather than being daunted by it. And from the start, Child, a red-haired, freckle-faced girl who grew to 6'3", experienced a great deal of knocks. But rather than dwell on her awkward appearance, she felt 'free to be herself.' Child tried to join the military during the WWII effort, but was rejected due to a 'physical disqualification.' She eventually got a job with the OSS (a predecessor of the CIA) and was tasked with organizing massive amounts of data; later, this experience helped her craft precise, detailed recipes. More significantly, she met Paul Child—her future husband and #1 cheerleader—while working for the OSS. As Karbo persuasively argues, Paul 'gave her herself. Without him she wouldn't have found her calling at last' at age 38. Karbo's joyful take on the ebullient, self-described 'California hayseed' will charm readers new to the twists and turns of Child's life, as well as devoted fans."—Publishers Weekly