Papyrus: The Plant that Changed the World—From Ancient Egypt to Today's Water Wars 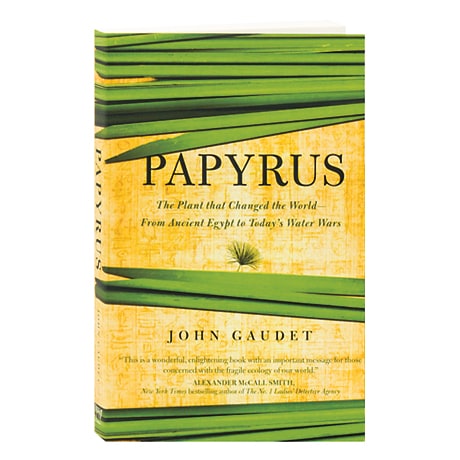 Papyrus: The Plant that Changed the World—From Ancient Egypt to Today's Water Wars

Rarely thought about in our modern world of manufactured paper (its namesake), papyrus was long essential to human civilization—and could prove just as vital in 21st-century Africa, notes ecologist and advisor John Gaudet. In ancient Egypt and around the Mediterranean, papyrus provided food, rope, fuel, and boats as well as paper for books and bookkeeping; indeed, papyrus scrolls preserved the knowledge of Western civilization after it was nearly wiped out by 6th-century famines and plagues, argues Gaudet. Still among the fastest growing vegetation on earth, this unique swamp reed produces its own "soil," a peaty matrix that floats, and has the remarkable ability to filter and clean the water—properties that could foster sustainable growth in lands where water is at a premium.

"Describing various regions of Africa where papyrus swamps still exist, Gaudet explains their ecological effect of keeping water clean, their potential to ameliorate pollution, and the contextual politics of water use. Along the Nile River, at Lake Tanganyika and environs, and further south on the Zambezi and Okavango Rivers, Gaudet touts the potential of papyrus to contribute to solutions of neighboring countries' conflicts over water. But papyrus-the-peacemaker is not what most readers associate with the plant; it is ancient Egypt, with which Gaudet begins his book. Noting its former range (little papyrus grows in modern Egypt), Gaudet ambles from properties of papyrus that underlie its usefulness to its ubiquitous depiction in pharaonic art and monumental architecture. Offering abundant information, Gaudet's combination of environmental advocacy and botanical objectivity forms a unique resource about a unique organism."—Booklist