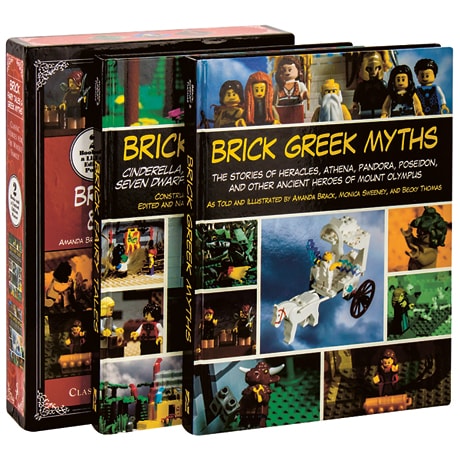 Lightning bolts flash and great armies clash, swords are brandished and spells are cast, maidens and goddesses all are wooed, and Lego heads roll across throne rooms and woods in this slipcased collection of 34 classical myths and 13 classic fairy tales, cleverly (and hilariously) interpreted in Lego bricks. See the Titans scaling Lego Mount Olympus to battle brick Zeus and the new gods, and follow Persephone as she's taken away to a shadowy Lego Underworld. Watch Cinderella leave her Lego glass slipper at the ball as the clock strikes 12, and try to find your way home by Hansel's path of brick breadcrumbs. The handsome slipcased set also includes a two-sided 34 × 23–inch poster, with Zeus riding in his sky chariot on one side and a smiling Red Riding Hood meeting the wolf on the other.