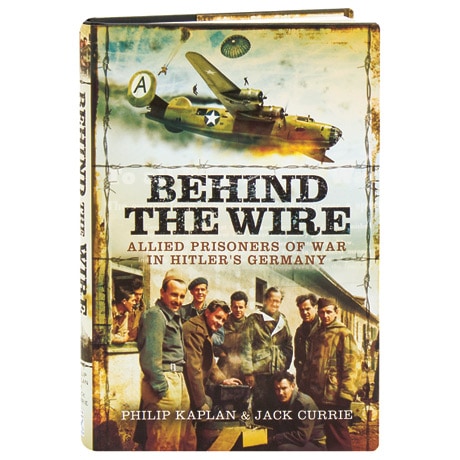 In his riveting account of Allied prisoners, Philip Kaplan details the trials and tribulations experienced by the British and American airmen who were shot down over Europe during World War II, to be incarcerated "behind the wire" in enemy camps. He explains how some set their minds on escape, dreaming up plots and plans to achieve this end, while others retreated away from their comrades and into themselves as the grim reality of their predicament pushed them into debilitating depression. Here too are those determined not to sit idle, instead building theaters, recreational areas, and other facilities within the camps, helping to make their time behind the wire—and that of their fellow comrades—infinitely more bearable.

"The chapters take a chronological approach by describing each phase confronting a prisoner, starting with their capture, interrogation, arrival in the camp and what they would encounter there, in terms of their fellow prisoners, guards, meals, and the wide variety of entertainments which were devised as a means of diverting the mind from what would otherwise be an extremely tedious and uncertain existence. Other chapters touch on escape, the terrible conditions which many endured on the long march of 1945, their eventual liberation, and an area which is often overlooked; returning to civilian life and the difficulty of adjusting to a world with which they had little in common. Each chapter is generously laced with veterans' accounts, and their rich insights are invaluable because researching prisoner of war camps is a notoriously difficult area, and uncovering any more than the most basic information on specific individuals is next to impossible. The words of ordinary prisoners do much to fill this vacuum, and so for anyone who wishes to understand what typical life behind the wire was like, there really is no need to look any further than this book."—Pegasus Archive