The Ghosts of Happy Valley 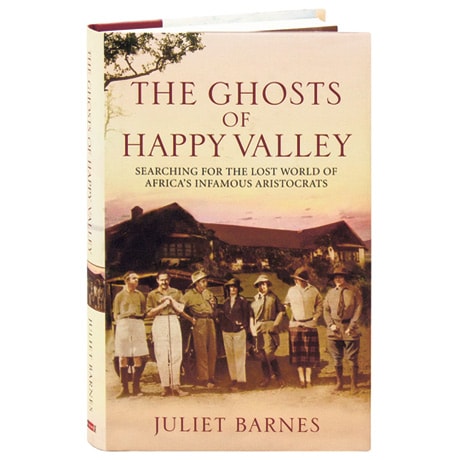 The Ghosts of Happy Valley

Once a byword for hedonistic excess, "Happy Valley" was the name given to the Wanjohi Valley in the Kenya Highlands, where a community of affluent white expatriates settled between the world wars. Also the home of writer Karen Blixen and aviator Beryl Markham, Happy Valley became infamous under the influence of troubled socialite Idina Sackville, whose life was told in Frances Osborne's hugely popular book The Bolter, as well as the 1941 murder of the Earl of Erroll, chronicled in James Fox's White Mischief. A lifelong Kenyan, whose grandparents knew some of the Happy Valley set, Juliet Barnes here embarks on an archaeological quest to find what's become of their once-grand estates.

"A problem with the depiction of Happy Valley arises when you encounter stories like that of Mary Miller, to whom I am very distantly related. Juliet Barnes hears that Mary 'lived off lorry-loads of champagne and booze before shooting herself....' Also that she and her husband were on the edge of the notorious party set in their home near the Wanjohi or 'Happy' Valley, a chilly cleft in the Aberdare highlands near where Barnes herself lives today. The gossip is entirely untrue, as Barnes, a white Kenyan whose book thankfully begins to debunk the Happy Valley silliness, discovers. Beautifully written."—Spectator (London)

"Barnes merges travelogue with history, visiting the ruined and reclaimed homes—once opulent abodes with rose gardens—of the wealthy and often ennobled white settlers of Wanjohi Valley, near the Aberdare mountains in west central Kenya. The author's journey to find out from locals where the set lived is determined and admirable."—All About History

"The author does a good job of presenting the various views, with added insights after visiting the homes and hearing local lore about some of the main players. In the end a well-thought-out blended theory of the motive for Lord Erroll's murder and the possible perpetrators gives yet another twist to this unsolved mystery.... The book is a valuable addition to the library of anyone interested in this period of Kenya's history."—Old Africa Magazine