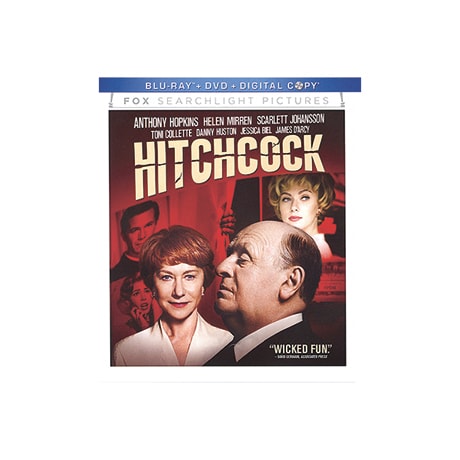 (Academy Award Nominee for Best Makeup & Hairstyling) There's no disputing that Alfred Hitchcock was one of a kind, but if there is an actor who can portray the master of suspense, it is Anthony Hopkins in this 2012 biopic. At a career crossroads, Hitchcock decides to adapt Robert Bloch's novel Psycho for the screen; to do so, he will have to contend with illness, interference by the studio executives, and even the voice of serial killer Ed Gein inside his head. The notoriously strong-willed director has a savvy ally, however, in the person of his wife, Alma (Helen Mirren). Scarlett Johansson and James D'Arcy co-star as Janet Leigh and Anthony Perkins, respectively; look for Ralph Macchio as screenwriter Joseph Stefano. Both Blu-ray and standard DVD formats are included in this two-disc set, while the extras include six featurettes on Alfred Hitchcock and the making of this film.

"Hopkins nails Hitch perfectly.... [This film] is so well made, so much fun and so suspenseful that it would make the original Hitchcock proud."—Huffington Post