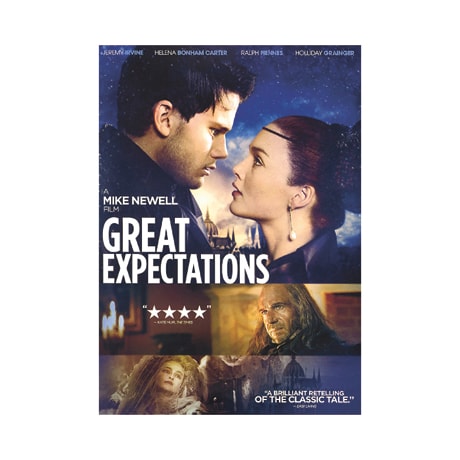 (BAFTA Nominee for Best Costume Design) After inheriting a fortune from a mysterious benefactor, orphaned Pip (Jeremy Irvine) moves to London, believing that he might finally be able to win the favor of the beautiful Estella (Holliday Grainger), a spoiled heiress he has loved since childhood. Conditioned by her benefactress, the eccentric spinster Miss Havisham (Helena Bonham Carter), Estella expresses little emotion and manipulates the men who take an interest in her. Pip sees his hopes for the future dangled just out of reach, but he also discovers that the two women are central to the mystery of his own birth and origins. This 2012 adaptation of the Dickens classic co-stars Ralph Fiennes as the convict Magwitch, Robbie Coltrane as the lawyer Mr. Jaggers, and Sally Hawkins as Mrs. Joe.