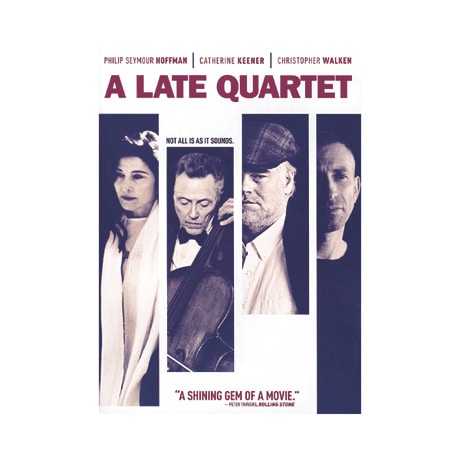 Diagnosed with Parkinson's disease, cellist Peter Mitchell (Christopher Walken) prepares for one more concert with the Fugue String Quartet; after 25 years together, however, the ensemble is being torn apart from within. As second violinist Robert (Philip Seymour Hoffman) feuds with Daniel (Mark Ivanir) for supremacy in the group, he makes an impulsive mistake that will mar his relationship with his wife Juliette (Catherine Keener)—the quartet's violist—and their daughter (Imogen Poots). This "deeply felt, musically savvy film" (NYTimes) from 2012 features an exquisite soundtrack, with music by Beethoven, J.S. Bach, and Joseph Haydn. Also included here is Discord and Harmony, a featurette on the making of the film.

"How much does one need to know about classical music to appreciate this film? Not very much. Like all masterful films, it contains what is needed to appreciate it. All that is needed is an interest in human nature, which during the quartet's period of crisis is abundantly revealed. Actors such as Keener, Walken, Hoffman and Ivanir are frequently seen in roles that don't really test them. That's the nature of the commercial cinema. What a pleasure to see them sounding their depths."—Roger Ebert