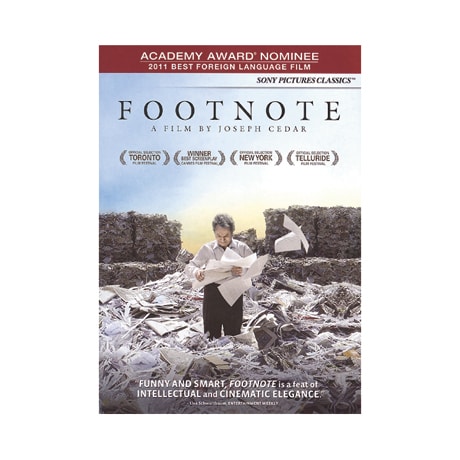 (Academy Award Nominee for Best Foreign Film and Winner for Best Screenplay at the Cannes Film Festival) Despite having dedicated his life to the study of the Talmud, Israeli scholar Eliezer Shkolnik (Shlomo Bar Aba) has received little recognition for his purist approach to religious theories; in the same field, his ambitious son Uriel (Lior Ashkenazi) is an up-and-coming star. Unexpectedly winning an important prize, Eliezer's vanity is exposed, but Uriel is thrilled to see his father's achievements rewarded; when it appears that there may have been a mistake, however, the father and son's rivalry threatens to come between them. This 2011 film is in Hebrew with English subtitles. DVD extras include a making-of featurette and an interview with director Joseph Cedar.

"This Israeli film takes what might have been a trivial anecdote ... and turns it into a tragicomic opera with a great deal to say about Zionism, academia, family life and the way language functions as a bridge between the sacred and the profane."—NYTimes