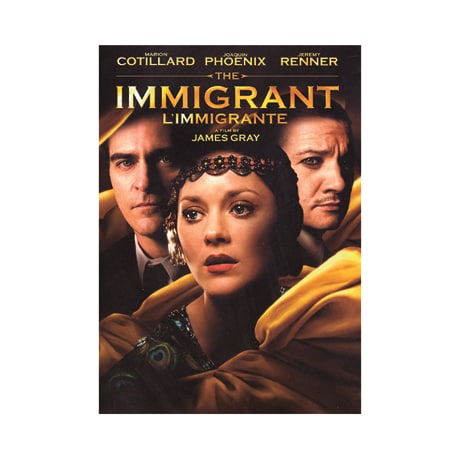 (Nominated for the Cannes Film Festival's Palm d'Or; winner of the Boston Society of Film Critics Award for Best Actress/Marion Cotillard) In 1921, Polish sisters Ewa (Marion Cotillard) and Magda (Angela Sarafyan) arrive at Ellis Island, but Magda is quarantined because of illness, in this 2014 film. Narrowly escaping deportation, Ewa falls under the sway of impresario Bruno (Joaquin Phoenix) and his cousin, the illusionist Emil (Jeremy Renner), both of whom fall in love with her yet are willing to prostitute her for easy money. All Ewa wants is to earn enough to help her sister, but the two jealous men resort to violence to settle their dispute over her; Ewa, however, may adapt to dog-eat-dog America more quickly than expected.

"The picture might be considered an ode to the way movies used to be, not just in terms of look and style but in the way they'd unfold before us, unashamed of teasing out deep, raw feeling, and the actors are game. [Phoenix] modulates his quirks here, as if in deference to the story and its nuances—he has a nightshade intensity, and the obsessive, twisted love he comes to feel for Ewa is believable in its confused complexity. Renner, with his tough little newsboy mug, is a scamp with a soul.... Cotillard, deft and subtle, is best of all."—Village Voice