Dick Tracy Versus Cueball; The Shadow Strikes (Scourge of the Underworld): Double Feature 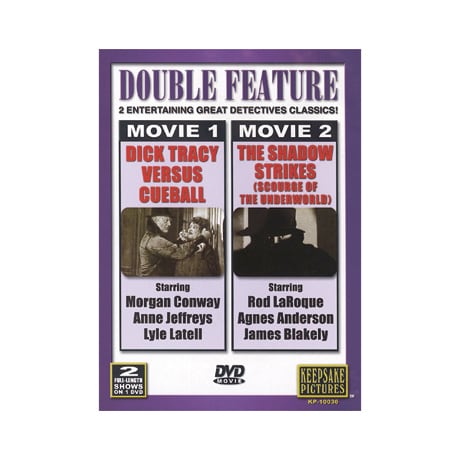 Dick Tracy Versus Cueball; The Shadow Strikes (Scourge of the Underworld): Double Feature

Two of noir's most colorful characters light up the silver screen in this entertaining double-feature. In Dick Tracy Versus Cueball (1946) Morgan Conway is the square-jawed detective, who enlists the help of his beloved Tess Trueheart (Anne Jeffreys) to bring down murderous diamond thief Harry "Cueball" Lake (Dick Wessel). Esther Howard co-stars as Filthy Flora, and Ian Keith parodies John Barrymore in the role of aged thespian Vitamin Flintheart. From 1937, The Shadow Strikes features Rod LaRocque in the role of Lamont Cranston. In the guise of the Shadow, Cranston foils a robbery, but he must also impersonate an attorney in order to solve the murder of a wealthy man who was killed before he could change his will.