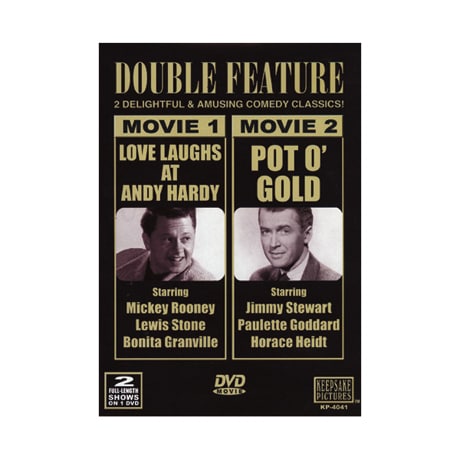 After being discharged from the army, Andy Hardy (Mickey Rooney) wants to pick up where he left off with his college sweetheart, Kay (Bonita Granville), in this 1946 film, the 15th in the series. Andy knows that his parents (Lewis Stone and Faye Holden) won't approve, so he tries to keep it all a secret, but hijinks ensue, notably when Andy gets locked out of the house in his bathrobe. Also included in this double feature, Pot o' Gold (1941) stars Jimmy Stewart as Jimmy Haskell, a factory worker who gets to fill in as host of a radio program. As he incorporates music into the show for the first time, Haskell achieves success, but will he and Molly (Paulette Goddard) be able to end the feud between their families in time to get married?