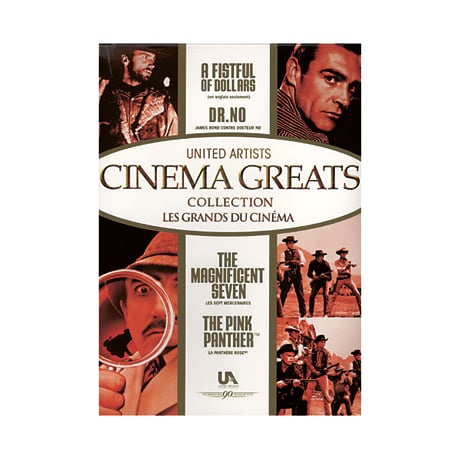 (Golden Globe Winner/Ursula Andress in Dr. No; Academy Award nominees for Best Score/The Magnificent Seven and The Pink Panther) Featuring four especially entertaining classics from the 1960s, this set includes a pair of the finest westerns ever made, both adapted from Akira Kurosawa's films. In A Fistful of Dollars (1964), Clint Eastwood is a gunslinger working both sides of a blood feud, while The Magnificent Seven (1960) chronicles the efforts of a ragtag group defending a Mexican village from bandits; the outstanding cast includes Yul Brynner, Steve McQueen, James Coburn, Eli Wallach, and Charles Bronson. Also included here, 1962's Dr. No stars Sean Connery in the first installment of the James Bond franchise—although it is Ursula Andress who steals the show when she emerges from the ocean in a bikini—along with The Pink Panther (1963), which introduced the equally unforgettable Inspector Clouseau (Peter Sellers) and the iconic cartoon character who shares his name with the film; Henry Mancini's jazzy soundtrack also earned him a Grammy Hall of Fame Award.