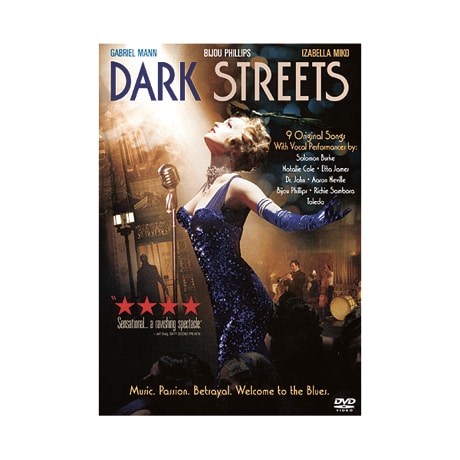 The playboy owner of a 1930s nightclub spins out of control amid love triangles, murder, and pressing debt in this 2008 thriller. Chaz (Gabriel Mann of Revenge and Mad Men) has inherited the club from his father, a utilities magnate who died under suspicious circumstances. Amidst power blackouts, Chaz searches for clues, contends with loan sharks, and watches his lush life take a nose dive. Based on Glenn Stewart's stage musical The City Club, Dark Streets is a film noir homage buoyed (à la Moulin Rouge) with excellent song-and-dance numbers. These are performed with sultry élan by Bijou Phillips and Izabella Miko (Miko's numbers are actually sung by the Irish powerhouse Imelda May). DVD extras include director and cast commentary as well as deleted scenes.

"As he pokes around and discovers the dark secrets behind his dad's business dealings, Mann also has to mediate a romantic and professional crisis: His headliner and sometime girlfriend (Bijou Phillips) feels threatened by a new singer (Izabella Miko) brought in by a shady cop (Elias Koteas) who protects the club."—A.V. Club

"A tale of urban decay, melancholy, and murder…. The film's soundtrack [is] a collection of blues originals performed by legends like Etta James, Aaron Neville, and B.B. King, all of whom know a little something about spinning darkness into art."—Austin Chronicle

"Budding cinematographers probably could study the way Samuels uses lenses, light, offbeat props and existing architecture to create a feeling of lushness while using minimal resources. Half of the movie is shot from low angles, so the ornate ceilings of Los Angeles' historic Tower Theater can do much of the atmospheric heavy lifting."—The Oregonian