A Bold and Dangerous Family: The Remarkable Story of an Italian Mother, Her Two Sons, and Their Fight Against Fascism 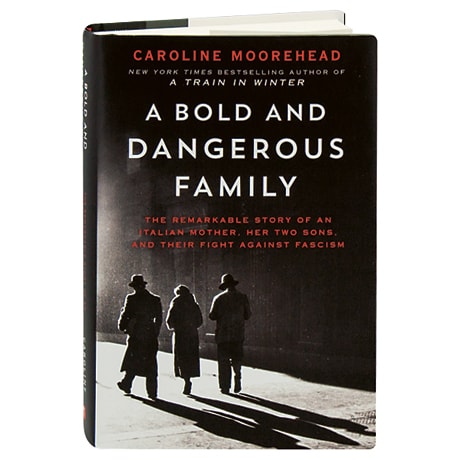 A Bold and Dangerous Family: The Remarkable Story of an Italian Mother, Her Two Sons, and Their Fight Against Fascism

(First Edition, Signed Bookplate) In this follow-up to A Train in Winter and Village of Secrets, Caroline Moorehead delivers another story of resistance in the portrait of an aristocratic Italian family that stood up to fascism. As populist, right-wing nationalism swept across Europe after World War I, and Italy's Prime Minister Benito Mussolini began consolidating his power, the cosmopolitan Rosselli family took a public stand against fascism, led by their fierce matriarch Amelia. Her sons Carlo and Nello led the opposition, taking a public stand against Il Duce that few others in their class dared risk—and which ultimately cost them their lives—yet the Rossellis' efforts helped define the path of Italy in the years between the world wars. Presented here in a first edition, with a bookplate signed by Moorehead, this stirring saga portrays a family driven by loyalty, duty, and courage, yet susceptible to all the self-doubt and fear to which humans are prey.

"An extremely personal and engaging story about the price one family paid for its political resistance.... A must-read."—Library Journal (starred review)

"Expertly alternating vivid domestic detail with lucid exposition of the gradual evolution of totalitarianism, Caroline Moorehead allows her readers not only to know, but also to feel, how it was to endure fascist oppression."—Guardian (London)

"Moorehead's portrait of the Rosselli brothers is at once a political history of pre-second world war Italy, a beautiful literary portrait of two brave young men, and a gripping tale of intrigue, espionage and escape.... I finished it impressed, breathless and enormously moved."—Observer (London)