Where the Past Begins: A Writer's Memoir 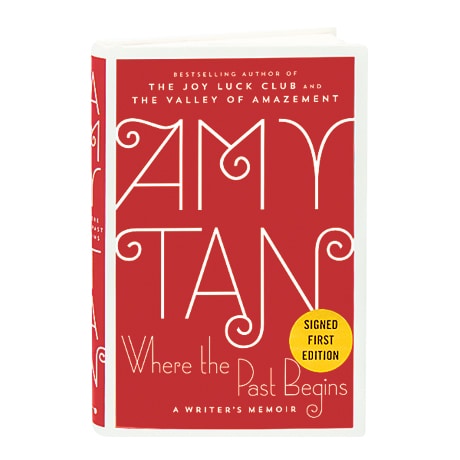 Where the Past Begins: A Writer's Memoir

(First Edition, with Tipped-in Autograph Page) (Nominated for the 2017 Andrew Carnegie Medal) In this follow-up to her previous writing memoir The Opposite of Fate, Amy Tan explores the symbiotic relationship between fiction and emotional memory—how a fluid fictional state of mind unleashed near-forgotten memories that became the nucleus of her novels—and what made it both unlikely and inevitable that she would become a writer. More specifically, Tan delves into vivid memories of childhood trauma, the self-doubt found in her journals, and heartbreaking letters to and from her mother. She also finds shocking truths uncovered by family memorabilia (the real reason behind an IQ test she took at age six, why her parents lied about their education, mysteries surrounding her maternal grandmother), and for the first time writes about her complex relationship with her father, who died when she was 15. We are very pleased to offer this supremely revealing memoir as a first edition with a tipped-in page autographed by Amy Tan.

"In her ambushing and revealing memoir, beloved novelist Tan chronicles with striking candor, sharp wit, and storytelling magic stranger-than-fiction traumas. She illuminates the often-tumultuous role music has played in her life, and how music and her love of drawing have shaped her writing. She recounts two neurological disasters, one with Lyme disease–caused brain lesions—Oliver Sacks wrote about her 'seizure induced hallucinations'—the other a severe concussion that ended her pre-novelist academic life in linguistics. As though her excruciating battle to regain language skills isn't astounding enough, Tan also tracks down the education expert who gave her IQ tests throughout her childhood, an inquiry that unexpectedly yields harrowing hidden truths about her family's past in Shanghai, from the fate of her concubine grandmother to her mother's wildly abusive first marriage, a scandalous affair with an electrical engineer, their marriage and precarious immigrant status in the U.S., and their debilitating struggle to establish themselves only to have Tan's father and older brother develop fatal brain tumors.... Tan's [memoir] is electric with her forensic curiosity and extraordinary ability to extract from suffering startling insights into the mind-body connection, inheritance, memory, and creativity. A profound work of endless fascination, discovery, and compassion."—Booklist (starred review)