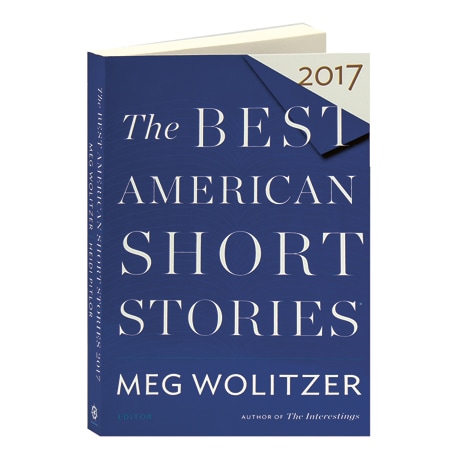 "If you know exactly what you are going to get from the experience of reading a story, you probably wouldn't go looking for it," writes guest editor Meg Wolitzer in her introduction to this 2017 edition of the original Best American collection. "You need, in order to be an open reader of fiction, to be willing. To cast a vote for what you love and then wait for the outcome." Among these 20 stories you'll find a man with a boyfriend and a girlfriend, naval officers trapped on a submarine, a contestant on America's Funniest Home Videos, and a gay man desperate to be a father—unforgettable characters waiting for an outcome, burning with stories to tell. The book includes contributions from T.C. Boyle ("Are We Not Men?"), Jai Chakrabarti ("A Small Sacrifice for an Enormous Happiness"), Emma Cline ("Arcadia"), Danielle Evans ("Richard of York Gave Battle in Vain"), Lauren Groff ("The Midnight Zone"), Eric Puchner ("Last Day on Earth"), Jim Shepard ("Telemachus"), Curtis Sittenfeld ("Gender Studies"), and Jess Walter ("Famous Actor"). Since its inception in 1915, the Best American series has become the premier annual showcase for the country's finest short fiction and nonfiction. For this 102nd edition of The Best American Short Stories, series editor Heidi Pitlor first reviewed hundreds of periodicals from the previous publishing year, selecting scores of outstanding works, before Wolitzer made the final selection of the very best pieces.