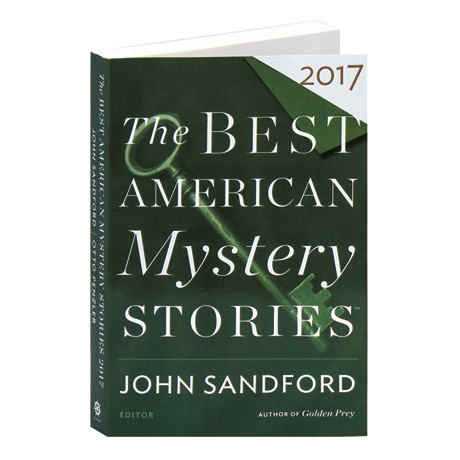 "Some people might tell you that crime short stories, unlike the more precious kind, are a kind of fictional ghetto, full of cardboard characters and clichéd situations. Not true," writes guest editor John Sandford in his introduction. "These stories are remarkably free of bullshit—although there's always a little, just to grease the wheels," he winks. From an isolated Wyoming ranch to the Detroit boxing world, from kidnapping and adultery in the Hollywood Hills to a serial killer loose in a nursing home, these 20 stories pack an entertaining abundance of criminal activity, psychological suspense, and bad intentions. Since its inception in 1915, the Best American series has become the premier annual showcase for the country's finest short fiction and nonfiction, and the mystery anthologies—under series editor Otto Penzler—have long been a favorite. From Penzler's long list, culled from pieces published in the previous year, Sanford chose the top 20, from such contributors as C.J. Box ("Power Wagon"), Gerri Brightwell ("Williamsville"), Jeffrey Deaver ("The Incident of 10 November"), Brendan DuBois ("The Man from Away"), Trina Corey ("Flight"), Craig Johnson ("Land of the Blind"), Joyce Carol Oates ("The Woman in the Window"), and Peter Straub ("The Process Is a Process All Its Own").

"There isn't enough Xanax in anyone's medicine cabinet to calm the jitters these 20 skillful stories will unleash."—Kirkus Reviews

"Fans of such notables as C.J. Box, Peter Straub, and Joyce Carol Oates chiefly known for their novels will be pleased to see how well they write at shorter length."—Publishers Weekly