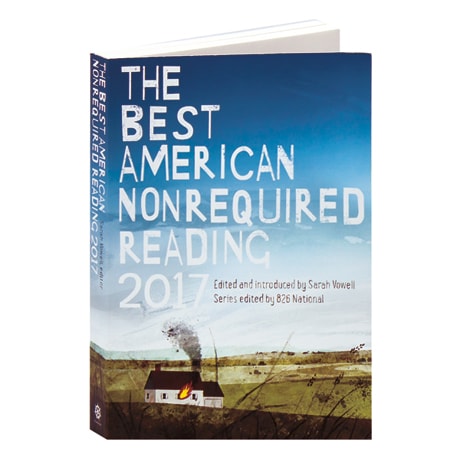 Though we still miss Dave Eggers (who launched the wildly misnamed Best American Nonrequired Reading series in 2002 and helmed it for more than a decade), we can't think of a better guest editor than Sarah Vowell, author of Lafayette in the Somewhat United States, The Wordy Shipmates, and Assassination Vacation. Since 2004, Vowell has volunteered with various 826 National writing centers for teen students, who have been the finders of Nonrequired's material from the very beginning. Together, they and Vowell hashed out this 2017 collection of new fiction, nonfiction, poetry, comics, and category-defying gems. Among the 28 pieces are contributions from Ta-Nehisi Coates ("My President Was Black"), Teju Cole ("Fable"), Louise Erdrich ("How to Stop a Black Snake"), Masha Gessen ("Autocracy: Rules for Survival"), Sheila Heti ("A Correspondence with Elena Ferrante"), Kima Jones ("Homegoing, AD"), Lin-Manuel Miranda ("You'll Be Back"), George Saunders ("Who Are All These Trump Supporters?"), and Andrew Sullivan ("I Used to Be a Human Being").