The Sound of the King's Singers 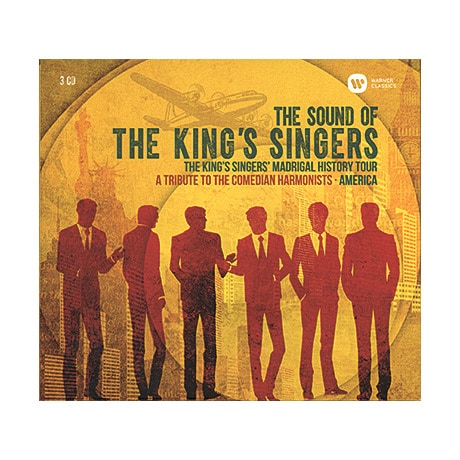 The Sound of the King's Singers

Founded in 1968, the members of the King's Singers have changed over the decades, but the group's interpretations of both classical and popular favorites have set a consistently high standard. This three-disc set includes The Madrigal History Tour (1984), featuring 34 songs from five different languages by such composers as Orlando Gibbons ("The Silver Swanne"), John Dowland ("Fine Knacks for Ladies"), and Orlando di Lasso ("Bon jour et puis quelles nouvelles"). A Tribute to the Comedian Harmonists (1985) is a grab bag of popular songs, with the singers backed by piano on "Night and Day," "Stormy Weather," and Duke Ellington's "Creole Love Call," although they also toss in a mesmerizing vocal rendition of Rossini's William Tell overture. From 1989, America features the vocal sextet accompanied by Carl Davis and the English Chamber Orchestra on Simon & Garfunkel's "Bridge Over Troubled Water," "The Sound of Silence," and "Homeward Bound," as well as Don Maclean's "Vincent," Jimmy Webb's "Wichita Lineman," and Randy Newman's "It's Lonely at the Top."