Chaucer's Tale: 1386 and the Road to Canterbury 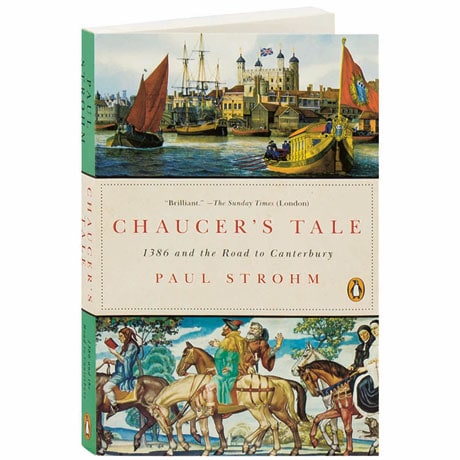 Chaucer's Tale: 1386 and the Road to Canterbury

At the beginning of 1386, Geoffrey Chaucer—lauded today as the father of English literature—was a middle-aged Londoner with a modest bureaucratic post; his literary successes had been confined to a small audience of intimate friends. But by year's end, he was swept up in a series of disastrous events that would ultimately leave him jobless, homeless, separated from his wife, and exiled in the countryside of Kent. Unbroken by these reversals, Chaucer pursued a new life in art. In this history, Paul Strohm vividly recreates the bustle of everyday life in 14th-century London while he unveils the fascinating story behind Chaucer's journey from personal crisis to rebirth as the immortal poet of The Canterbury Tales.

"Strohm's victory-from-the-jaws-of-defeat account is touching, but the real thrill is his portrait of Chaucer's London, one square mile of church bells pealing, neighbors gossiping, politicians conniving, severed heads rotting on spikes (quite near Chaucer's windows), and poetry rising out of all this." —The New Yorker