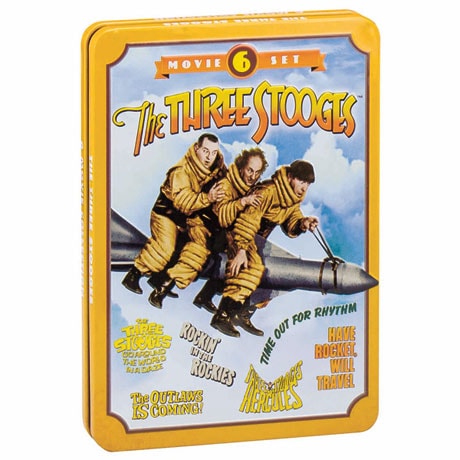 A comedic institution lasting nearly half a century, the Three Stooges made dozens of featurelength films, and this set contains a half-dozen doozies from their prime. Have Rocket, Will Travel(1959) finds the funnymen heading to Venus, where they meet a firebreathing tarantula and get cloned by a mad computer in; Time Out for Rhythm(1941), they star alongside Rudy Vallee and Ann Miller; and the boys take the lead in the 1945 musical Rockin' in the Rockies. After making a comeback, the 1960s were busy times for these ageless knuckleheads, and they are seen here in The Three Stooges Go Around the World in a Daze, The Outlaws Is Coming, and The Three Stooges Meet Hercules. (8 hrs 6 mins/2014) 2 CDs